Psychotherapy for Bipolar Disorder and Hypomania

I treat people across the entire bipolar spectrum, including bipolar type 1, and I also have a subspecialty in hypomania.

Hypo is Greek for less than, and hypomania has all the properties of mania, but in a milder and more functional form.

Bipolar disorder is diagnosed when a person has a lifetime history of a mania or hypomania and depression.

Symptoms of mania and hypomania include:

Symptoms of depression include: 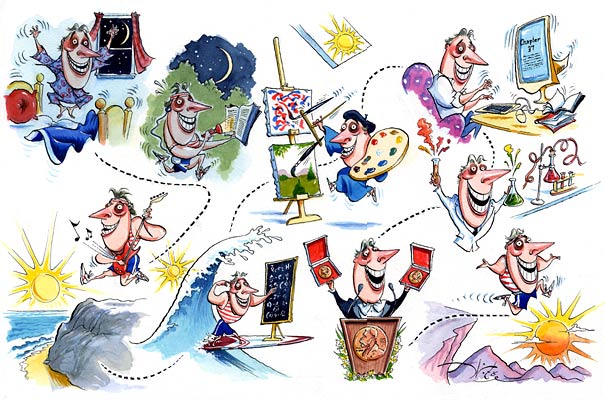 Illustrations from The New York Times article, “Hypomanic? Absolutely. But oh, so productive!” Read the article.

In my book, The Hypomanic Edge, I define the temperament this way:

Hypomanics “are filled with energy; flooded with ideas; driven, restless and unable to keep still; channel their energy into the achievement of wildly grand ambitions; They are brilliant “big picture” “out of the box” thinkers, but they are also easily distractible and poor at managing day to day details.

They often work on little sleep; feel brilliant, special, chosen, perhaps even destined to change the world; They are fast-talking; witty and gregarious, charismatic, and persuasive; Their mood can be euphoric but they also become easily irritated by minor obstacles; They are risk takers; They sometimes acts impulsively, with poor judgment, in ways that have painful consequences, including sexual acting out, substance abuse and overspending.

They can be aggressive and arrogant and prone to making enemies, feeling misunderstood by those who do not accept their vision and mission.”

Hypomania is a double-edged sword. Hypomanics can be inspiring visionaries, innovators and go-getters who accomplish amazing things.

But while their extraordinary energy, drive, confidence, creativity and charisma are the secret to their success—their impulsivity, irritability, impatience, arrogance and poor judgment can be the source of their downfall.

Hypomanics are charismatic leaders, creative thinkers and attractive mates, but they can become exhausting, abrasive, erratic, and alienate those closest to them in both work and life.

“Once hypomanics lock their sights on a goal, it’s sort of like Michael Jordan driving to the hoop,” Gartner says. “They might fail, but they’re determined to go through any barrier. They’re impelled to throw the full force of their energy and drive toward a goal. That’s why people who accomplish great things are disproportionately coming from this mindset.”

In addition to traditional therapy techniques, I use meditation to help bipolar patients gain impulse control and self-awareness. The cultivation of mindfulness helps them slow things down, listen to their own better  judgement, and make better choices. It also helps them listen to others with a less ego-centric ear and that can help save relationships.

In my work with hypomanics, I emphasize gaining the capacity to become calm, grounded, and self-regulated, while not losing your creative spark and drive—capitalizing on hypomania’s strengths while guarding against its liabilities.

How do you work with medication?

While I’m by no means anti-medication, I do believe our field is over medicating many bipolar patients. Less can be more. I help patients find the balance that allows them to control symptoms without bearing the all too common side effects of over-medication that can dampen their energy, creativity and cognitive clarity.

I always say more meditation means less medication. If you can use meditation to self-regulate you can rely less on chemicals to do the job.  I’ve helped many of my patients reduce their medication, and get off the medications with the most pernicious side effects, like the atypical antipsychotics. They are grateful to be able to think more clearly, feel more deeply, and have more energy, in short, to feel more like themselves.

“During the first twenty years of my therapy practice, I spent a significant portion of my time persuading patients to start psychiatric medication. But over the last five years, more and more of my practice has become taken up with giving patients permission to take less medication.” 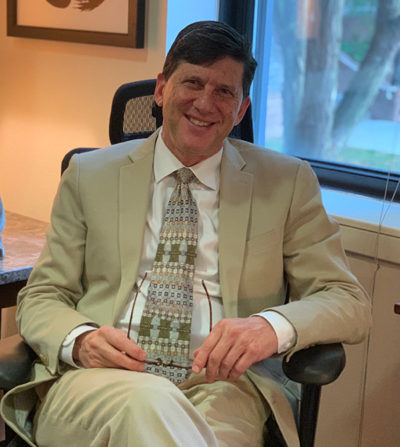 I offer my bipolar patients an informed treatment approach which is both tough (when needed) and compassionate in the context of a committed long term relationship. Experience and research shows this kind of therapeutic relationship combined with meditation has a high rate of success.

Interested in treatment for bipolar disorder in Baltimore Reach out today » 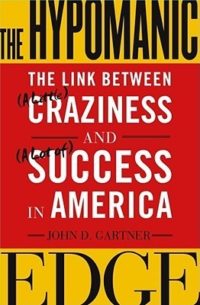 Named one of the most “notable new ideas” in the world in 2005—New York Times Magazine, “Year in Ideas” issue

“For centuries scholars have tried to explain the American character…A professor of psychiatry attributes American exceptionalism to a new and hitherto unsuspected source: American DNA. He argues that the United States is full of energetic risk-takers because it’s full of immigrants, who as a group may carry a genetic marker that expresses itself as a restless curiosity, exuberance, and competitive self-promotion—a combination known as hypomania”–New York Times Magazine, “Year in Ideas issue, 12/11/05

Hypomania, a genetically based form of mild mania, endows many of us with energy, creativity, enthusiasm, and a propensity for taking risks. America has an extraordinarily high number of hypomanics—grandiose types who leap on every wacky idea that occurs to them, utterly convinced it will change the world. Market bubbles and ill-considered messianic crusades can be the downside.

But there is an enormous upside as well, in spectacular entrepreneurial zeal, drive for innovation and material success. Americans may have a lot of crazy ideas, but some of them prove to be brilliant inventions.

The Hypomanic Edge in the Press…